What are Crown Lands in Hawaii

by Disruptive Host
What are Crown Lands in Hawaii

Defend Hawaii or the Boogaloo?
byDisruptive Host
You are here:
< Back

I recently had a discussion on social media that a person referred to Sam Pailthorpe King who was both a respected attorney and a US District Judge. This person claimed that Sam P. King believed in giving “crown lands back to the Hawaiian Kingdom”, and pointed me to some vague articles on the matter.
To which I debated that annexation was lawful based on the international law of annexation since the requirement that international recognition was reached by all nations around the world, including the former treaty partners of the former Hawaiian Kingdom that the USA was in fact the legitimate government of Hawaii.
But then I got researching the matter. This is one article that discusses this matter.
Sam P. King was of the opinion that so-called “crown lands” were owned by the Royal family as a private reserve, meant especially for them. Reference this newspaper article from December 1994. 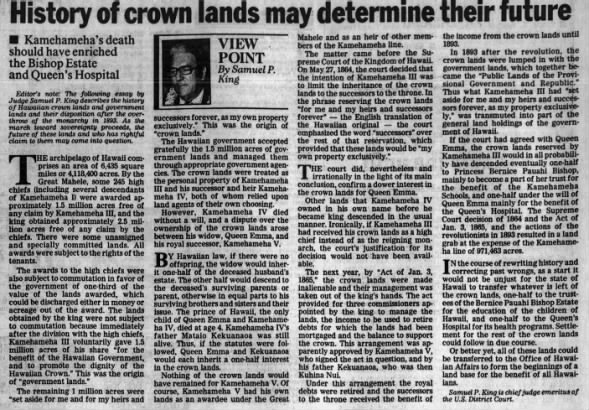 My reply to this article is this:

I will say, that I only hope that Sam King II does not feel the same way about the corrupt organization OHA, or of this racial inheritance. The “crown lands” should not have been owned/consumed by one family, who also happened to be the governmental head of state. That seems like a conflict of interest.

For example, if Donald Trump randomly claimed some BLM land for “himself and his heirs”, that would be immoral.

The reason why I mentioned Sam King II (Sam P. King’s grandson), is that I had an interaction with Sam W. King II that to me seemed a little strange, I don’t plan on discussing the strange interaction at this point. But it did give me a strange sensation that Sam II was sympathetic to the racialism that the protesters insist upon. This seemed strange because Sam W King II is the organizer of the IMUA TMT movement, that is working on promoting the benefits of the Thirty Meter Telescope.

I have asked Sam W. King II what his position is on his grandfather’s work, I am awaiting his reply.

Update January 9th 2020 (his letter to the editor was dated 08-13-2019 but I had not saw this before today): https://www.westhawaiitoday.com/2019/08/13/opinion/my-turn-threats-effective-at-silencing-pro-tmt-hawaiians/

Sam King II sent a letter to the editor of West Hawaii Today, and the following is what he said (and this clears the question up for me completely)

The polls conducted so far on the TMT show overwhelming support from the people of Hawaii for TMT.

In 2018, 72% of Native Hawaiians supported TMT. A recent Civil Beat poll found that 64% of Hawaii supports TMT. Support among Native Hawaiians dropped, however, to 44%. What happened? And if nearly half of Native Hawaiians still support the project, why are they not speaking out, especially online? The answer is obvious: They don’t want to deal with the “backlash.”ADVERTISING

Any Native Hawaiian supporter of TMT that has posted online can regale you with stories of being called a traitor, not Hawaiian, a fake Hawaiian, or had their very Native Hawaiian identity challenged. In a recent five-hour text conversation I had with one protector, TMT was barely discussed but there was extensive discussion about whether or not I was a real Native Hawaiian. Kalepa Baybayan, one of the original Native Hawaiian Hokulea navigators, was called a traitor in the comments to one recent interview. There are also threats of physical violence, such as kidnapping or having one’s throat slit. This is the language of bullies.

Need more examples? There is an entire Instagram feed dedicated to it.

Some of these threats have been reported to police. However, the protesters intimidation campaign is smart and dynamic. Most online threats are just on the edge of illegal. Social and peer pressure on Native Hawaiians offline is not strictly illegal. The protesters even tried to create a fake TMT supporter account to post violent rhetoric in an attempt to show that TMT supporters are equally vitriolic online.

The threats are having an effect offline. Numerous Native Hawaiian supporters of TMT report that they have friends that would speak out but do not want to upset their friends, deal with online trolls, or have their business boycotted.

The protesters have also called for protests in schools, which will inevitably lead to bullying of Native Hawaiian children who support TMT. University professors are also supporting TMT, which will be a strong hint to students to tow the anti-TMT line. The daughter of the Dean of the University of Hawaii at Manoa School of Hawaiian Knowledge chained herself to a cattleguard on Maunakea. What do you think native Hawaiian students studying Hawaiian language at UH are going to say about TMT while at studying under such a dean? The pressure on Native Hawaiians to conform with the protesters’ narrative is immense.

There are also the lies. The most popular for a while was that the TMT was going to be nuclear powered. Next is that an aquifer is being polluted. That has been debunked repeatedly. The size of the TMT has regularly been misrepresented. If I believed everything the protesters posted in their echo chambers I would not support TMT either. But most of what they post is false, and the TMT is in fact a great project.

One non-Native Hawaiian supporter of the protesters explicitly told me that he was helping Native Hawaiians regain sovereignty and that he believed the Native Hawaiian people “would allow those who can live under new leadership to stay.” Gee, thanks.

There is no reason a child born to a native Hawaiian mother in Utah has more of a claim to “Hawaiian” citizenship than a fifth-generation Japanese child who was born and raised on Oahu. Where will that Japanese child go when the racially privileged kingdom returns? When all the land is sacred and its use subject to the whim of religious authorities, who will decide where people can live, work, and play?

The system of government impliedly proposed by the protesters’ illegal blockade of access to Maunakea is non-functional. It rests on the basis that a subset of a single racial group can claim property rights based on a state-backed “host culture” religion.

Their philosophy violates fundamental tenets of what makes for the highest functioning societies – the rule of law and the separation of church and state. Everyone therefore has a stake in this discussion, and no one should feel they are not entitled to an opinion merely because they are not a certain race. Indeed, those of us who are Native Hawaiian and support TMT need the support of everyone in our community.

I visited Maunakea during the recent hurricanes. I can personally attest to the fact that I saw no violence, no trash, was not threatened in the camp, and I ran into old friends in the camp with whom I had pleasant conversations about TMT.

But whatever discipline the core protesters at the camp maintain, their Kapu Aloha does not appear to extend into the community or onto the internet. I have not heard them say it extends into the future, either.ADVERTISING

Thus, when someone threatened me and my pro-TMT rally co-organizer online (on a picture of us posted by the Governor of the State of Hawaii, no less) by saying, “one day we come for you both,” Kapu Aloha did not give me much comfort. I reported the threat to the police. But if they thought the threat would silence me, they were wrong.

Sam King is a resident of Honolulu.