The Chicago Hate Crime is Real Legacy of Barack Obama

Jeff Crouere
|
Posted: Jan 07, 2017 12:01 AM
Share   Tweet
The opinions expressed by columnists are their own and do not represent the views of Townhall.com. 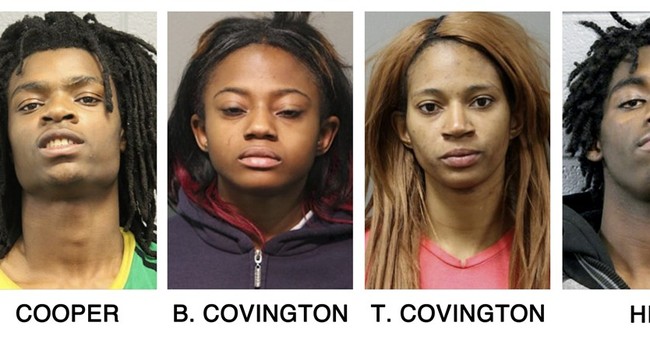 After eight long years, thankfully, the second term of President Barack Obama is finally coming to an end.

On his way, out of office, the President has issued more executive orders, set aside 1.65 million additional acres for national monuments, released more prisoners and tried to find as many ways as possible to politically handcuff his successor.

Along with his continual executive overreach, the President should be remembered for expanding the federal debt by almost $10 trillion, giving us a stimulus plan with no “shovel ready jobs” and forcing upon the American people the unworkable and disastrous Obamacare legislation that will hopefully be repealed in short order. Obama also decimated our military, allowed ISIS to gain a foothold in over 30 countries, unlawfully granted amnesty to millions of illegal aliens, and presided over an administration littered with corruption from the IRS to the Department of Justice.

While the unemployment rate is listed at 4.7% in the last report, the real health of the nation’s economy can be measured by the 95 million Americans who are no longer in the workforce. This number has increased by 15 million during the Obama years, surpassing any job growth that was created during his two terms.

Many of the jobs created during the Obama years were in the service sector, filled with positions that are characterized by low wages and poor working conditions.  Today, millions of Americans are forced to work two jobs just to pay the bills, while others are so dejected with the lack of decent jobs in the economy that they have stopped looking for work and resorted to government assistance or private charity just to survive.

One result of poor economic conditions is an increase in crime. In 2016 there has also been an upsurge of violence in many urban areas and more law enforcement officers were killed. According to Steven Weiss of the Officer Down Memorial Page, in the last year, there was a “61 percent increase in law enforcement officers shot and killed” compared to the previous year.

A contributing factor to this ongoing violence against police officers is racial tension. It is clearly increasing across the country. Our President was advertised as a racial healer, someone who could bring the races together. The theory made sense as Barack Obama is bi-racial with a white mother and a black father. Unfortunately, these dreams were never achieved, instead, the country has suffered from more racially oriented violence.

From his attack on the Cambridge, MA police in the Professor Gates incident to his comments about Trayvon Martin and the riots in Ferguson, Missouri, President Obama has earned a well-deserved reputation as a critic of police and a sympathizer to those who spew racial grievances. His former Attorney General, Eric Holder, famously claimed that the nation was too cowardly to have a real conversation about race. Thereafter, prominent members of the Obama administration fixated on racial issues throughout their two terms. Unfortunately, the rhetoric was not directed at racial healing, but fostering claims of racial injustice. Thus, racial agitators like Reverend Al Sharpton were given almost unfettered access to the White House. This did not bring the races together, only exacerbated existing racial problems.

The latest incident occurred on Tuesday in the President’s hometown of Chicago. A mentally challenged 18-year old white man was tortured by four black adults, ranging in age from 18 to 24. The young man was kicked, threatened with a knife, forced to kiss the ground and drink toilet water, while he was also gagged, tied up and bloodied from his scalp being cut open. These tormentors also contacted the young man’s family with demands for money and harassing updates on his torture, which lasted up to five hours, according to police. The attackers yelled “F-white people and F-Trump” while they brutalized him. Even more horrific is that the attack was captured on video and broadcast on Facebook Live. After being arrested, the four suspects were each charged with aggravated kidnapping, hate crime, aggravated battery with a weapon among other serious offenses. Incredibly, none of the accused criminals expressed any remorse for their actions.

In America, today, this kind of crime is occurring far too often. Instead of admitting his responsibility for fostering this type of environment, President Obama recently claimed that race relations have “gotten better” during his two terms in office.

The President is truly delusional if he believes his own talking points. Fortunately, the American people realize there is a serious problem. In a July 2016 Washington Post poll, 63% of respondents viewed race relations as “generally bad, and a majority say they are getting worse.” By November, a Gallup poll showed that the number of Americans who viewed the country as united was down to only 21%, while the percentage viewing the country as divided had increased to 77%.

This recent incident and the poll results show the true legacy of Barack Obama. January 20, 2017 cannot get here soon enough.

Share this on Facebook
Tweet
WATCH: Pelosi Says a Democratic President Will Declare a National Emergency On This Issue
Beth Baumann |
Omar Critics Note Her Hypocrisy After She Asks the Most Offensive Question Ever in a Congressional Hearing
Cortney O'Brien |
Reporter to Ocasio-Cortez As She Celebrates: Um, Wouldn't Amazon Have Created Thousands of Jobs?
Cortney O'Brien |
Democratic Party Announces Plans For First Two 2020 Presidential Debates
Beth Baumann |
Dems: Prohibited Possessors Should Be Prosecuted for Trying to Buy Firearms, Unless...
Beth Baumann |

WATCH: Pelosi Says a Democratic President Will Declare a National Emergency On This Issue