"That's part of what makes us special as Americans. Unlike the old empires, we don't make these sacrifices for territory or for resources. We do it because it's right." -Barack Obama in a 2011 speech to U.S. soldiers returning from Iraq
Among other things, president Barack Obama:
"...we've increased
foreign military
financing to
record levels."
John Pilger summed up the past 8 years of Obama by writing, "according to a Council on Foreign Relations survey, in 2016 alone Obama dropped 26,171 bombs. That is 72 bombs every day. He bombed the poorest people on earth, in Afghanistan, Libya, Yemen, Somalia, Syria, Iraq, Pakistan.
"Every Tuesday ­ reported The New York Times ­ he personally selected those who would be murdered by mostly hellfire missiles fired from drones. Weddings, funerals, shepherds were attacked, along with those attempting to collect the body parts festooning the “terrorist target.”
"Under Obama, the U.S. has extended secret “special forces” operations to 138 countries, or 70 per cent of the world’s population. The first African-American president launched what amounted to a full-scale invasion of Africa. Reminiscent of the Scramble for Africa in the late Nineteenth Century, the U.S. African Command (Africom) has built a network of supplicants among collaborative African regimes eager for American bribes and armaments.
"It was Obama who, in 2011, announced what became known as the “pivot to Asia”, in which almost two-thirds of U.S. naval forces would be transferred to the Asia-Pacific to “confront China,” in the words of his Defense Secretary. There was no threat from China; the entire enterprise was unnecessary. It was an extreme provocation to keep the Pentagon and its demented brass happy.
"...Propaganda is his triumph. The lies about Russia -- in whose elections the U.S. has openly intervened -- have made the world’s most self-important journalists laughingstocks. In the country with constitutionally the freest press in the world, free journalism now exists only in its honorable exceptions." (ENTIRE ARTICLE)

News after Obama was elected to a second term - listed (roughly) chronologically, most recent first:

obama-news-1
"... American leadership in this world really is indispensable. It’s up to us, through action and example, to sustain the international order that’s expanded steadily since the end of the Cold War, and upon which our own wealth and safety depend." -Barack Obama in a letter that he left for Donald Trump on Trump's inauguration day.
obama-news-2
obama-news-3

News prior to Obama's re-election 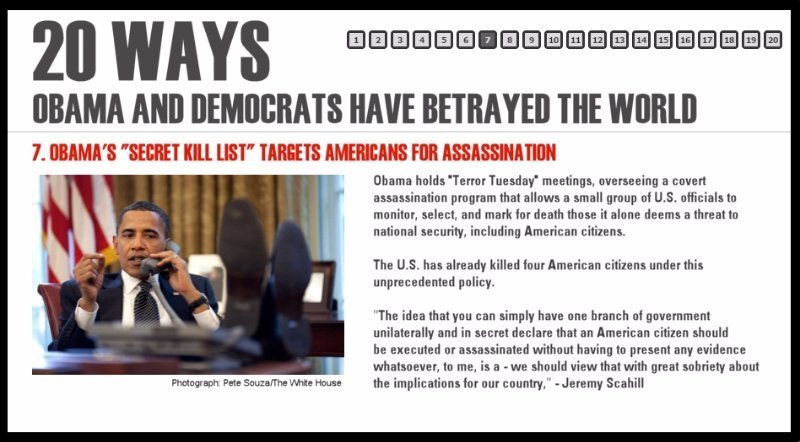 News prior to Obama taking office

obama-news-5e 9/28/08  St. Pete for Peace statement on Obama following the first Presidential debate
Dear friends of peace,
The presidential debate on Friday night confirmed our previous statements about Barack Obama - he is not an antiwar candidate.  St. Pete for Peace, in the strongest terms, condemns Obama's positions on Afghanistan, Pakistan, Iran, Russia, Venezuela, and Iraq, among others.  Like John McCain, Obama is pro-military and pro-empire.  And just like the Republican Party, the Democrats are not representing the people, as further evidenced by the Democrats who pushed at least as hard as the Republicans for the $700 billion Wall Street bailout.
Some people believe Obama is just making pro-war statements to get elected, but if that were true, how do you know he's not also being deceitful about the things he says in which you agree?  And if he's saying things now just to get elected, how do you know he wouldn't say those things to get re-elected?  Some say that an Obama presidency would mean that their antiwar voice has a chance of being heard.  How can this be true if he's not listening to your voice now when he's trying to get your vote?
"But he's better than McCain" is the reason many give for their support of Obama.  Yes, that's true.  But, if somebody knocked on your door and said, "You can either give me your children, or you can give me every dollar you earn for the rest of your life" what would you say?  You would say "neither" and shut the door.  It's time to shut the door on the Republicans and Democrats until they start representing the people.  Of course, John McCain and the Republicans are dangerous and should not be in power, but acceptance of the "lesser of two evils" philosophy is one reason we continue to be stuck with two evils.
So, what do we do?  Well, if you support the Democrats and Obama, then at least demand they start representing you, or abandon the party.  This is not a call to join some other party - election politics should be just one small part of participating in your country's affairs.  This is a call to consciousness.  What you do once every four years pales in comparison to what you do every day.
"Voting is easy and marginally useful, but it is a poor substitute for democracy, which requires direct action by concerned citizens" - Howard Zinn, Feb. 2008